AdSpyglass Blog | All Articles | What Is Header Bidding and How Does It Work?

What Is Header Bidding and How Does It Work?

Its user base might be growing, but header bidding is yet to fully take itself beyond the limitations of ad tech buzzword towards the status of widely understood concept.

For the benefit of those that still can’t get their head around what it means, where it came from and where it’s heading, we’ll look into these three points in the hope of bringing some clarity to the process.

Where does it come from?

To start, we’ll look into the mechanics of programmatic, or real-time bidding (RTB) – the engine that houses our subject.

Medium and large publishers looking to sell their inventory via RTB will often link up to more than one ad network in order to ensure they get the best prices. This also reduces the risk of remnant inventory if no takers arise on any given platform.

The networks are ordered in something of a value chain – called ‘the waterfall’ – where anything that’s unsold gets pushed down the ladder until it finds a bid. Google and its AdX exchange have a lot of precedence in this way of working due to most publishers using Doubleclick to monetise their inventory. In the event of ad space going spare, Google will serve its own choice of ads, or even those pointing to its very own Display Network.

It’s important to note that publishers can circumvent the waterfall by selling their inventory in a direct manner. In some cases, this will be done for premium spots reserved for the best prices.

If you still can’t get your head around how the value chain works, here it is in graphical format: 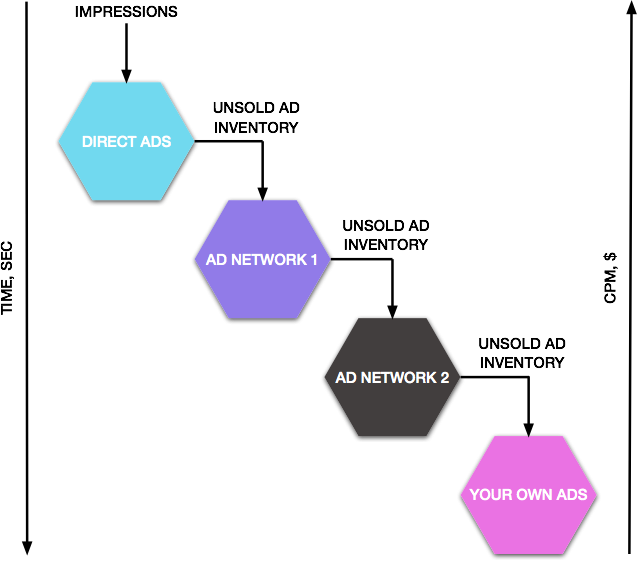 This might look like a good way of working, and so many media owners and buyers use the waterfall to trade ad space in real time. It does however come with issues, the main ones being:

Things needed changing and in 2009, AppNexus came up with a solution that integrated a pre-bid phase into the mix. Designed to break up some of the dominance held by Google, the technology sought to maximise publisher revenue by allowing them to act as a supply-side platform (SSP). This was the early foundations of header bidding.

Read also: Native Ads | Everything you wanted to know as a website owner

What is header bidding?

Header bidding enables publishers to open up all of their inventory to demand partners – be it an SSP, an ad exchange or otherwise – for an auction conducted in a simultaneous manner. A lack of preference towards one network means the impression always finds the highest bidder, while the simpler process saves a lot of time in trying to work out which ad goes to whom.

There are other ways that header bidding differs from the waterfall method. As we mentioned earlier, the latter is housed on a remote server, away from the domain in question. Header bidding is essentially a piece of JavaScript on the publisher’s site, placed in the ‘header’ of their page, which connects with ad servers to collect bids and assign the winners.

Read also What Is Ad Mediation And How Does It Work

Here’s a little look at how that process plays out: 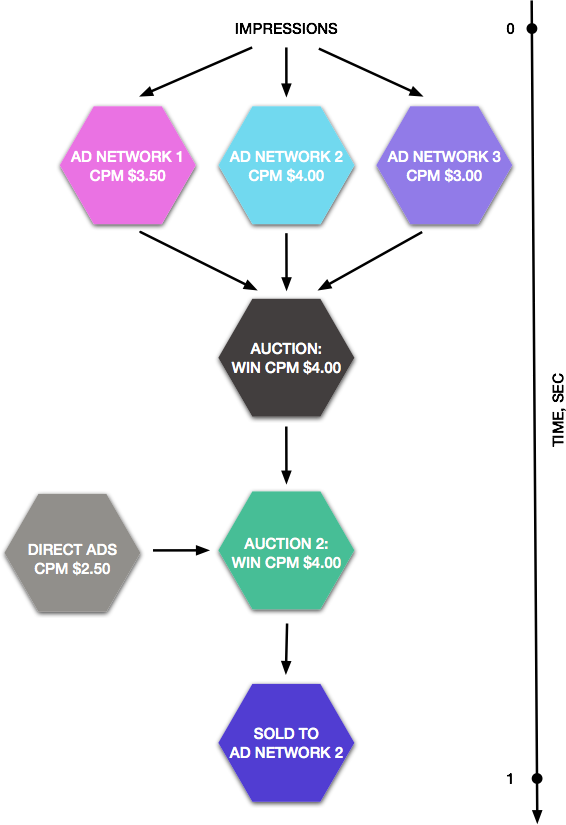 As aforementioned, header bidding is a great way for publishers to boost their revenue. Some sites have reported huge lifts in programmatic earnings just by using the method, with every demand partner having the potential to lift this figure by 10% each time.

Some of the other advantages include:

Unfortunately it is not without its downsides. Although things do get easier once everything’s up and running, header bidding tag integrations cost money and are a bit more complex as they don’t come with the same level of assistance as the waterfall method. Analysts have interpreted this as a ‘hacky workaround’ to DoubleClick.

Site delays are another issue, as having the JavaScript on the page can also cause disruptions in the end user’s own experience on the site. Having good ad operational staff to keep an eye on things is vital, but it’s easy to see how smaller publishers can’t afford the risk.

Lastly, there is the risk of yield. Many see header bidding as the next new craze and it’s certainly enjoying its time in the limelight. Will the market adapt to the process and start playing the system? Only time will tell.

The most interesting debates from header bidding circulate around what will happen once the buzz dies down.

One of the areas primed for improvement is latency, as despite delays coming from the process of uploading inventory to multiple networks, the presence of additional code on the publisher’s site means header bidding can also slow things down.

An oft-cited solution is to have the process moved from the browser to a separate server, like with the waterfall. This would host the same conversations but without carrying a burden on the user’s connection to the page. Some of the tech industry’s biggest and brightest (Google, Amazon etc) are in the process of trialling similar, ‘server-side’ technology for header bidding, although analysts believe this to be in its very early stages.

One thing that might speed this up is co-operation between programmatic firms. This may seem optimistic given the competition between certain parties, but with the recent announcement that AppNexus, Pubmatic and Index Exchange will use the same header connection to enhance access to partners and prevent segregation of advertisers, even this may be about to change.

All in all, while some have been sceptical over whether the practice can maintain the same level of coverage it’s attracted, header bidding is alive and well in programmatic.

There are advantages and disadvantages to every ad network. Thanks to ad mediation services like AdSpyglass, publishers can link themselves up to all of the platforms above and reap the benefits that each can offer.

Outstream video is one of the most user-friendly ad formats. And user-friendliness is a big part of how well your ads perform and how much

Payment Methods and Ad Networks. Looking for the Best Match

There are hundreds of payment methods available today. Some of them might suit you better, others not so much.  Besides, there are new clients who

Over 9’000 websites are already enjoying the benefits of the AdSpyglass Mediation system. Curious to try?

Register at AdSpyglass to get started.

Link your Ad Networks, import your ad feeds and get AdSpyglass code for your website.

See how Ad Networks compete with each other for every single ad impression and sell your traffic at the highest rate.