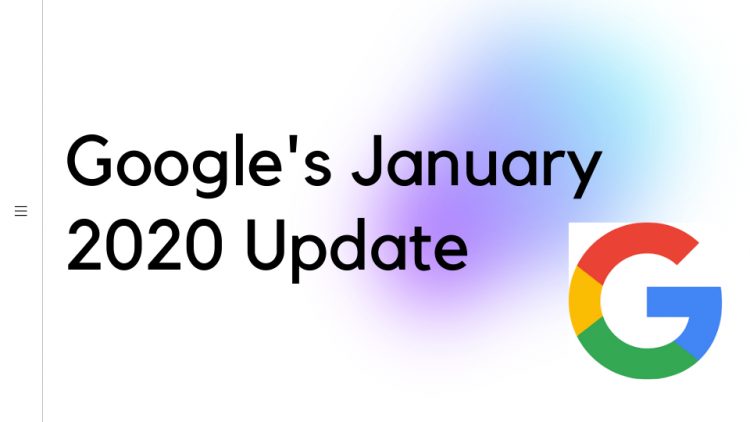 Google’s January 2020 Update: How Has SEOs Life Been Affected

On January 13th, Google announced the release of the January 2020 Core Update.

What is the latest official Google Algorithm Update, is the big question that people search in their browsers even these days. One of the main reasons, why “Google Update” is such a popular keyword is unpredictability, which is waiting for webmasters after each update.

Google makes hundreds of updates each year. Last year only Google made more than 600 core updates. Most of the updates go unnoticed. But not this time. The Broad Core Algorithm Update made serious SERP changes.

Table of Contents hide
1 What is a Google Broad Core update?
2 People were Saying
3 Some Forums Practical Clues 2020
4 What? The New Update?

What is a Google Broad Core update?

So, what are the differences from casual core updates? A Broad Core Update:

And you know, what hurts the most? There is no fix for websites that were previously suffered by Google update. The only thing can help – it’s improving the content quality.

One more thing you need to know. The sites suffered by one core update seem to be more likely to see changes in the next core updates. So, if you’ve been hit in one of the core updates since “Medic,” watch out. This is a continuous process, and Google is making it 24/7.

Google explains that a core update isn’t a punishment and that “there’s nothing wrong with pages that may perform less well.” But sure, it’s not soothing if your site was negatively impacted.

Let’s look at reporting changes in the SEOs forums, WebmasterWorld and BlackHatWorld. Here is a selection of reactions to the Google Core Update of 2020. From those messages, we can see, that the Core Update was quite bad news for some webmasters, but we can see also positive and neutral comments:

‘Haven’t had a single google visitor since the evening of january 13th. Ouch.‘

‘I have a website in Persian language and last night suddenly I saw my site dropped 10 places for my most important keyword (nothing changed for other keywords), any suggestion guys?‘

‘Already noticed about a 20% drop in traffic over the past few days. Let’s see how this goes, could just be Google dance.’

‘Seeing some positive changes at last. Saw a continuous decline in my rankings for the last couple of months. Based in the Netherlands.‘

“I got a nice bump up in traffic yesterday, the best day in the last 3 months‘.

‘We’ve had a nice increase (week over week and year over year) in the last couple of days, too’.

‘Seeing some quite strong increases across the board’.

‘No movements in my side, will wait and see‘.

‘I see no difference from my end’.

Read also: How to Manage Ads On Your Website

With all these changes, the whole strategy to get online traffic also changes. If your website lost its position, use these clues that can help you boost your organic traffic in 2020.

The very first you can do is to compare your website with the one that took your place in SERP. Look closer at their content and everything, it might give you some hints, what to do.

What else? Everybody knows about the most important things for websites: content (which is the king as we know from the SEO proverb), mobile indexing, page speed, keywords, backlinks, and social media work. Let’s not talk about this in detail.

There is a better suggestion: to take a closer look at webmasters forums. What if there is something more interesting than the usual SEO tips?

This is what webmasters share in their discussions about Google Update.

‘Guys, this update has nothing to do with quality links. Because I have not built/bought any links in either 2018 or 2019. Speaking about 20+ websites here. Not a single one got hit. The biggest sites all grew in traffic. The small remained the same. This makes me believe the update is authority/brand/content related. Maybe sites with low quality links are penalized, but definitely having or not having quality links has no impact as far as we speak about these latest updates.’ (Kikerinka)

‘NEVER been affected by a Google update. Simply give Google what they have ALWAYS asked for since the beginning of the internet:

‘There was something that rolled out on Monday, as I saw a ton of movement (mostly green). I’m going to double down on my theory that this current January update that is still rolling is almost exclusively backlink related. Couple interesting observations:

I would bet a good amount that this is Google cleaning out their index. Very Penguin-esque. Therefore, if you are buying poor links or not buying any kind of links at all, you were probably vulnerable to this update.’

So, what conclusions can be drawn from these messages? No links or good quality links/ backlinks, good content, LSI keywords, YouTube video, optimized images, links to authoritative sites – here are some common points of those sites that were not affected by the update.

People do hope that if everything is done correctly, their suffered sites will regain their positions. Well, let’s see.

What? The New Update?

It has been a month since the Google Broad Core update. And what we see? New threads on forums like this: “Google Updates and SERP Changes – February 2020”

The ranking changes in February 2020 were not-preannounced by Google. And then, Danny Sullivan responded to talk on Twitter by making it clear this was not a Core Update.

“We do updates all the time,” he said.

The thing is, no one is safe from losing positions and there is no “magic pill” for quick recovery. Therefore, now more than ever it is important not to stop working on the site and work hard to get higher positions as a result of the next update to Google’s search algorithms.

Not enough information? Watch our demo video, “how it works” video or read the AdSpyglass review.

Read also: What Is Ad Mediation And How Does It Work